All About Public-Use Microdata Areas (PUMAs)

PUMAs are redefined every ten years in conjunction with the decennial census. The U.S. Census Bureau partners with state data centers (SDCs, such as MCDC) to delineate PUMA boundaries for each state. New PUMAs are released about two years after the decennial census — the 2010 PUMAs were released in 2012 and the 2020 PUMAs in 2022. (On the MCDC website, the census year and PUMA release year are used interchangeably.)

The PUMA geography type was created specifically for use with public use microdata sample (PUMS) data, also called microdata, which contains individual records of the characteristics for a sample of persons and households. The Census Bureau has published PUMS data for every census since 1960, but PUMAs were first used for reporting PUMS data in the 1990 census. (Before 1990, PUMS data were reported for states, counties, and metro areas.)

Beginning with the American Community Survey (ACS, established in 2005) and the 2010 decennial census, the 1% (super) PUMAs were no longer used. The 5% PUMAs are the ones that are used today. On the MCDC website and in this document, the term PUMA almost exclusively refers to these 5% PUMAs. Also beginning in 2010, PUMAs were assigned names, usually determined by SDCs participating in the PUMA boundary definition program.

PUMAs are assigned five-digit codes that are unique within each state. Typically, larger (county or multi-county size) PUMAs have codes that end with "00". PUMAs that represent portions of a large-population county will have the same first three digits, with the last two digits assigned as "01", "02", etc. For example, St. Louis County contains eight PUMAs, numbered 01901 through 01908. PUMA codes may be the same in different states — they must be combined with state codes for unique identification at the national level.

The three-digit geographic summary level code for a PUMA is 795.

PUMA codes for every vintage are included in the MCDC's MABLE databases, which means they can be used within the Geocorr web applications.

We used the 2010 (or 2020, respectively) population as the weight variable, so these files show the overlaps as of April 1 of the respective census year. The variable afact indicates the portion of the earlier PUMA's population living in the later PUMA; the variable afact2 goes the other way, showing what portion of the later PUMA's pop also resides (resided) in the earlier PUMA.

MCDC's data collection includes a puma_master_2010 dataset. Each observation (record/row) in the dataset describes a single PUMA, providing location information by showing intersections with other more familiar geographies. The dataset also contains a set of key indicator variables from 2013 vintage ACS summary data. We will add a puma_master_2020 dataset once the complete 2020 census data is released (2023).

Using Geocorr to Relate PUMAs to Other Geographic Codes

The Geocorr web applications create reports and/or comma-delimited files showing how different geographic layers correspond to one another. A good example relevant to PUMAs uses Geocorr to show how PUMAs relate to counties in the state of Colorado. To do this, invoke the application and fill out the form as follows:

In your browser a page will be generated summarizing the results and providing hyperlinks to the two output Files. If you click on the listing (report format) link you should see a report, the first few lines of which should look like this: 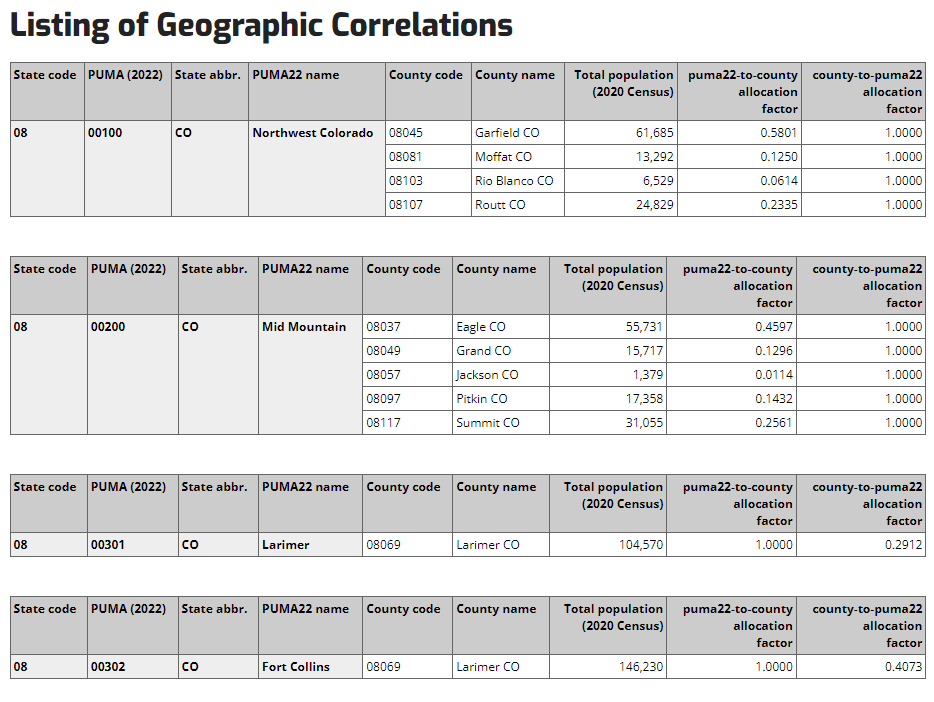 This screen shot shows the first four values of the source geocode, which is called puma22 in Geocorr. Each line of the report represents the intersection of the PUMA area with a target geocode — a county, in this example.

The first line of the report shows that the intersection of PUMA 00100 (Northwest Colorado) with Garfield County had 61,685 persons living in it, according to the 2020 census. The first allocation factor column (puma22-to-county) has a value of 0.5801, which indicates what portion of the PUMA's total population is represented by this intersection. So, 58% of this PUMA's population is in Garfield County. The last column, county-to-puma22 allocation factor, is the allocation factor going the other way. The value of 1.000 tells us that the entire county of Garfield is contained in PUMA 00100.

The third block on this report (for Colorado PUMA 00301, Larimer) shows a result where a PUMA is smaller than a single county. The puma22-to-county allocation factor is 1.0000, indicating that this entire PUMA is made of a portion of Larimer County. The county-to-puma22 allocation factor of 0.2912 indicates that about 29% of the population of Larimer County is within PUMA 00301.

Summary Data at the PUMA Level

The Census Bureau did not publish any summary data for PUMAs based on the 2010 decennial census. You will not be able to find a PUMA summary level on SF1 or using the data.census.gov website. However, it would be possible to aggregate data at the census tract level to create such summaries. You could use Geocorr to generate the required tract-to-PUMA equivalency file.

Data from the American Community Survey are available at the PUMA level. Data published for vintage years 2011 and earlier use the old 2000 PUMAs as the units. Starting with vintage 2012, ACS data used the 2010/2012 PUMAs. Similarly, data for the 2020 PUMAs will be reported beginning with the 2022 ACS release. MCDC's ACS Profiles application includes PUMA-level ACS data.

Detailed tables in the base_tables_1yr and base_tables_5yr subdirectories (within each acs[yyyy] directory) also contain data at the PUMA level.