All census data consist of summary statistics that describe geographic areas. (There are no census data for individual persons or households.) Geography provides the framework for census survey design, sample selection, data collection, tabulation, and dissemination. This page covers the extensive collection of geographic area types for which we can get census data, with particular emphasis on the coding scheme used to identify and relate them to one another. (For a deeper dive into the technical aspects of these subjects, see our More about summary levels page.)

The Hierarchy of Census Geography Types

The Census Bureau uses summary levels, representing a geographic level or type, for most of its data products. Summary levels define a hierarchical arrangement of geographic entities that allows for data ranking, sorting, aggregation, and mapping. 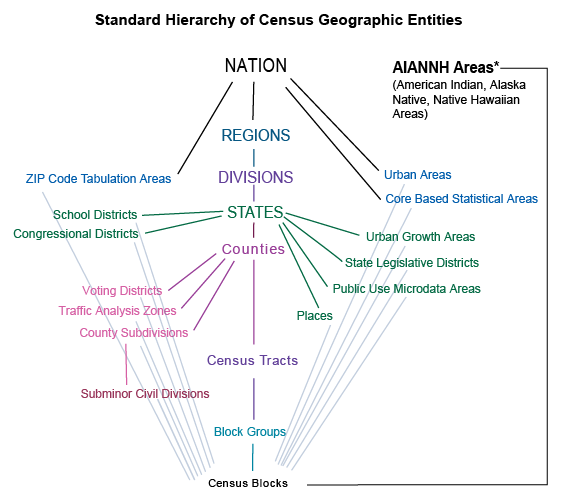 There 27 different geographic entities, in two basic categories, shown on this diagram. Some geography types have legal status and are not controlled by the Bureau, including counties, places (incorporated cities), legislative and school districts, etc. The Bureau is responsible for defining several others, such as census tracts, block groups, blocks, public use microdata areas, ZCTAs, etc.

The diagram shows many lines radiating from blocks, indicating that all geographic types can be described as a collection of blocks.

Because of this atomic nature, blocks are very important geographic entities. "Everything is made of blocks" is a useful concept when doing analyses that involve relationships between the various geographic layers. This the basis for MCDC's large set of block-level geographic-lookup tables called the master area block level equivalency (MABLE) files. These tables, combined with the Geocorr web applications, let users generate reports documenting and measuring geographic relationships.

This situation of defining census blocks in such a way that they are not split by any other census-recognized geographic entities did not start until 1990. Many things have changed about blocks over the decades, in particular their coding.

One of the factors complicating census geography is the time dimension. Regions, divisions, and states are no problem, since they tend to stay put over time. However, there are sometimes small changes to counties. Since the 2000 census, we have had county changes in Alaska, Colorado, South Dakota, and Virginia. (See Substantial Changes to Counties and County Equivalent Entities: 1970-Present for details.)

The time factor is particularly troublesome for entities such as places (cities), school districts, and ZIP codes, which tend to change frequently. Although the Bureau will always tabulate population estimates for places using the latest available boundaries, the data from the previous census will always be frozen to reflect a city's boundaries as of January 1 of the census year.

Congressional districts are subject to change every two years, but for the most part only undergo major changes every ten years following a post-decennial-census reapportionment. However, smaller changes can and do occur throughout the decade, and getting data for the instances of this coverage can be difficult or impossible.

The "down-the-middle" census geography hierarchy of census tracts → block groups → blocks is redefined every ten years. So the entities in use when accessing a 2000 dataset are not the same ones used for tabulating a 2010 dataset. Same concept, and in many areas you'll see a lot of unchanged tracts, but absolutely a different geographic layer.

A single code — the geoID — identifies every geographic entity in census data products. The geoID (sometimes called geocode, areaID, etc.) may be up to 40 characters long. Longer codes usually represent smaller entities. GeoIDs have a specific format for all areas:

The MCDC Geographic Codes Lookup application can help identify the geoID of many entities in the U.S.

All MCDC census data applications use summary levels (sometimes called area type or shortened to sumlev or sumlevel) to organize, filter, and/or search for particular geographic areas. Summary levels are identified by a three-digit code and a common name.

Different data products may use different sets of summary levels. For example, the ACS does not report data for census blocks (summary level 101). The following list includes only those summary levels most commonly used in MCDC applications.

010: Nation
The whole United States, including Puerto Rico and the U.S. Pacific Islands. GeoID: 01000US
020: Region
One of four large statistical groups of U.S. states and the District of Columbia (map). Example: Midwest Region (02000US2)
030: Division
One of nine statistical subdivisions of regions, about four to eight states each (map). Example: Mountain Division, part of West Region (03000US8)
040: State
One of the 50 U.S. states, Puerto Rico, and the District of Columbia. Example: Missouri (04000US29)
050: County
U.S. county or county equivalent. Example: Boone County, MO (05000US29019)
060: Minor Civil Division (MCD)
An administrative or legal division of a county, such as township or precinct. Not all states or counties have MCDs. Example: Galena township, Jasper County, MO (06000US2909726236)
160: Place
Loosely defined, any concentration of population. In practice, places include incorporated cities, towns and villages (legal entities) and Census Designated Places (populated areas that lack separate government, but are useful for statistical purposes). Example: Alba city, MO (16000US2900496)
140: Tract
A statistical subdivision of a county for purposes of census data collection. Census tracts generally have a population size between 1,200 and 8,000 people, with an optimum size of 4,000 people. Tract boundaries are relatively permanent, so tracts may be compared across different census years or data products. Example: Census Tract 105, Cole County, MO (14000US29051010500)
150: Block Group
A statistical subdivision of a census tract. Block groups generally contain 600–3,000 people, and never cross state, county, or census tract boundaries. Example: Block Group 2, Tract 9501.00, Adair County, MO (15000US290019501002)
101: Block
The smallest statistical unit of the U.S. Census. Census blocks cover the entire territory of the United States, Puerto Rico, and the Island Areas. Census blocks nest within all other tabulated census geographic entities and are the basis for all tabulated data. Example: Block 1000, Tract 9503.00, Butler County, MO (10100US290239503001000)
320: Metropolitan/Micropolitan Area
A statistical entity containing a substantial population nucleus, together with adjacent communities having a high degree of economic and social integration with that core. A metropolitan statistical area must have at least one urbanized area of 50,000 or more inhabitants. A micropolitan statistical area must have at least one urban cluster of at least 10,000 but less than 50,000 population. Metropolitan and micropolitan areas are collectively abbreviated as CBSA. Example: Joplin, MO Metro Area (32000US2927900)
400: Urban Area
A statistical entity defined by a minimum density. There are two types: Urbanized Areas have populations of greater than 50,000. Urban Clusters have populations between 2,500 and 50,000. Example: Branson, MO Urban Cluster (40000US09676)
340: Combined Statistical Area
A group of adjacent multiple metro-/micropolitan areas. Example: Denver-Aurora-Boulder, CO CSA (34000US08216)
795: Public Use Microdata Area (PUMA)
A statistical entity intermediate in size between county and state containing at least 100,000 people. PUMAs cover the entire U.S., are entirely contained in states, and do not overlap. Example: Boone County PUMA, MO (79500US2900600)
860: ZIP Census Tabulation Area (ZCTA)
A generalized areal representation of a U.S. Postal Service ZIP Code service area. ZCTAs are similar in extent and boundaries to ZIP codes. Example: 65203 (86000US65203)

Surprisingly, the Census Bureau doesn't publish a master list of all summary level codes. MCDC has compiled a complete list of all the ones we know about. Note that this list also includes codes that are non-numeric; these are not official Census Bureau codes. They are codes that we have used on our datasets when we created our own new geographic level (e.g., Missouri Regional Planning Commissions), or when we were unable to find out what code the Bureau was using for something.