In late June 2015, an news release from the U.S. Census Bureau indicated that, among other distinctions, Millennials — typically identified as persons born between 1982 and 2000 — officially outnumbered Baby Boomers — individuals born between 1946 and 1964. According to the Bureau, not only are Millennials now more numerous than Baby Boomers in the United States, they actually represent more than one quarter of the nation’s population. 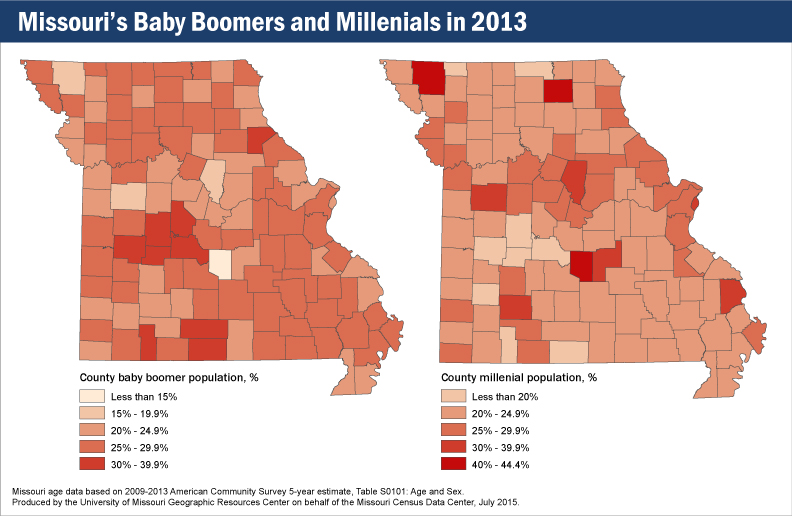 On a county-by-county basis, Missouri does not follow the national trend. Of Missouri’s 115 counties, only 37 have higher percentages of Millennials than Baby Boomers. Two counties, Webster and St Louis, actually report equal populations of Baby Boomers and Millennials. As can be reasonably expected, most of these younger populations are found in areas of Missouri that include, or are near, metropolitan areas. Kansas City, St Louis City, Springfield, Boone County (and all of its neighboring counties) all possess noticeably more youthful populations than the rest of the state. Although most Missouri counties are estimated to have more Baby Boomers than Millennials, an interesting discovery in the county-level age data is that the difference between the two populations is often very small. Of the 74 counties that have more Baby Boomers than Millennials, only eight counties display a difference between the two populations of 10% or greater.