Many of our users have been asking when the new, post-Census-2020 Congressional districts would be available in Geocorr. The short answer is that 118th CDs are now included in Geocorr 2022, along with current state legislative districts.

A somewhat longer answer is that the U.S. Census Bureau has not yet released shapefiles or block lists for building 118th CDs or current SLDLs or SLDUs from 2020 tabulation blocks — and is not planning to do so for several months yet.

The Bureau’s Redistricting Data Office (RDO) intends to publish block equivalency files for the 118th Congress and for the 2022 state legislative districts, but not until December of 2022 at the earliest. And, the Bureau’s Geography division will not be releasing block allocation files for the same areas at all. However, the new areas will be published as shapefiles in the cartographic boundary files collection around April or May of 2023. They may also be released with the 2022 TIGER/Line shapefiles, generally around October.

Because of this lack of availability, we obtained new CD and state legislative boundary shapefiles from The American Redistricting Project, merged them, and ran intersections against 2020 TIGER/Line block shapefiles to determine how every block fits into the new districts. This was a tedious process, especially since the block and district shapefiles didn’t line up exactly, but we now have enough data to use for correlations.

With all that said, the new legislative geographies in Geocorr 2022 should be considered provisional until such time as they can be verified via official Census Bureau block equivalency files or shapefiles. 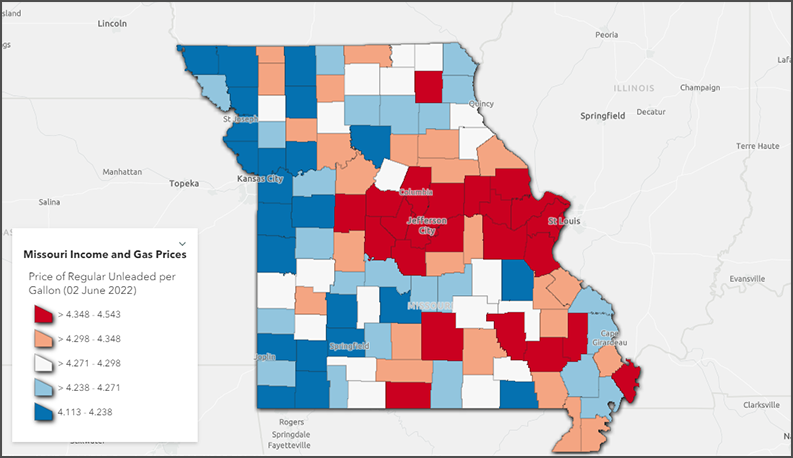 This month’s story map examines trends in Missouri median household income in comparison to gas prices. Data about Missouri income comes from the 2016-2020 American Community Survey via the Missouri Census Data Center, and energy costs data are based off the Consumer Price Index from the United States Bureau of Labor Statistics. County-level gas prices have been taken from the AAA Missouri Gas Prices site, which updates each day.

We have a handful of data updates to report this spring.

In addition, for the convenience of our GIS users, we’ve added national shapefiles for the 2022-vintage congressional districts (118th Congress) and state upper- and lower-chamber legislative districts. These were compiled from individual state shapefiles downloaded from the American Redistricting Project. We have attempted to clean and normalize the attribute tables. Please note that these are not official Census Bureau shapefiles.

Long-time users of this site who have subscribed to our email list (listserv) may be interested to know that the list is working again. For several months the old list was broken due to software changes. We’ve migrated all previous users to the new list. The address for subscriptions has changed. The new instructions are:

To subscribe, address an email message to listserv@po.missouri.edu. In the body of the message (not the subject), type:

Shortly after sending this message, you will receive a subscription confirmation and instructions on how to post your messages to the list or change your subscriber status. 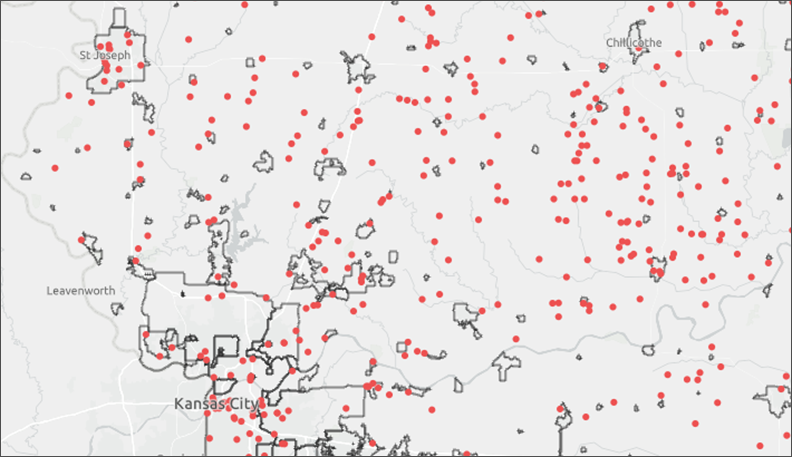 According to the  Federal Highway Administration’s National Bridge Inventory, there are about 25,000 bridges in Missouri. Show Me Safe Bridges!, the latest story map from the Missouri Spatial Data Information Service digs into the inventory and maps the best and worst of Missouri’s spans.

We’re happy to announce a new version of Geocorr based on 2020 decennial census geographies. Thank you for your patience!

Currently, Geocorr 2022 comprises the following geographies for all states, DC, and PR (where applicable):

In addition, Geocorr 2022 includes the following regions for the state of Missouri only:

We’ll add other geography types as they become available.

Longtime users of the Geocorr applications may notice a few other changes. Geocorr 2022 does not include the concentric ring pseudo-geocode options, nor the bounding box filter option. Our server logs indicated that these options were rarely used, and in a couple of instances were not actually functional. The HTML (web page) report option is now unchecked by default. The report output is the most resource- and time-intensive block of Geocorr’s code, and frequently causes program timeouts when very long reports (e.g., those using blocks) are requested.

Although Geocorr 2022 has been thoroughly tested, it should be considered a “beta” version for the moment. Please report any errors to Glenn Rice (riceg@missouri.edu).

How many people in Missouri actually exercise their right to vote?

As Missourians get ready to head back to the polls for the 2022 midterm election, our colleagues at the Missouri Spatial Data Information Service built a story map showing voter turnout for previous Missouri general elections from 2000 through 2020. 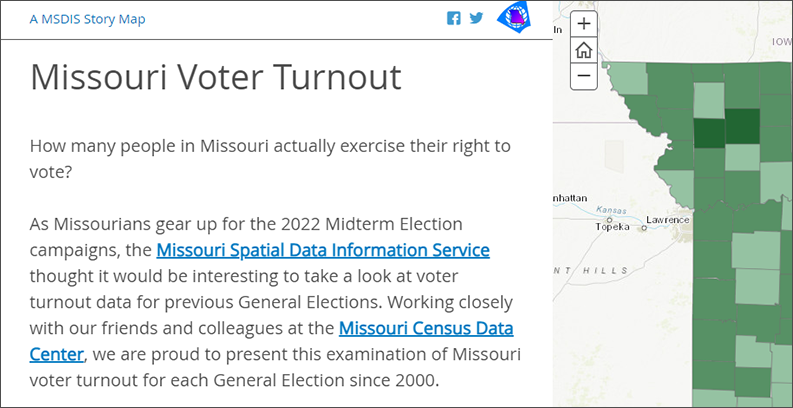 We now have the 5-year 2016-2020 ACS data available on our website. The ACS Profiles application includes the new data.

Both profiles and base tables are also available in SAS/Dexter format in our data archive at acs2020.

We have just a few minor data updates this month.

Last year, the Missouri Spatial Data Information Service (MSDIS) and MCDC brought you several interactive applications that focused on the US Census. We looked at what kinds of public services depend on an accurate census count for the proper distribution of funds and we explored the racial geography of Missouri at a county level. This was all in expectation of the release of the highly anticipated 2020 US Census.

Well, dearest friends and fellow map enthusiasts, the 2020 Census data is here. Let’s have a closer look at Missouri population changes since 2000 and 2010.