We have updated our latest (2013 vintage) Missouri county and subcounty population estimates. The Excel file contains four worksheets with different levels of geography — counties, cities (all, alphabetical), cities sorted by county, and all levels including subcounty units and partials. Get the file here or visit the Population Estimates page. 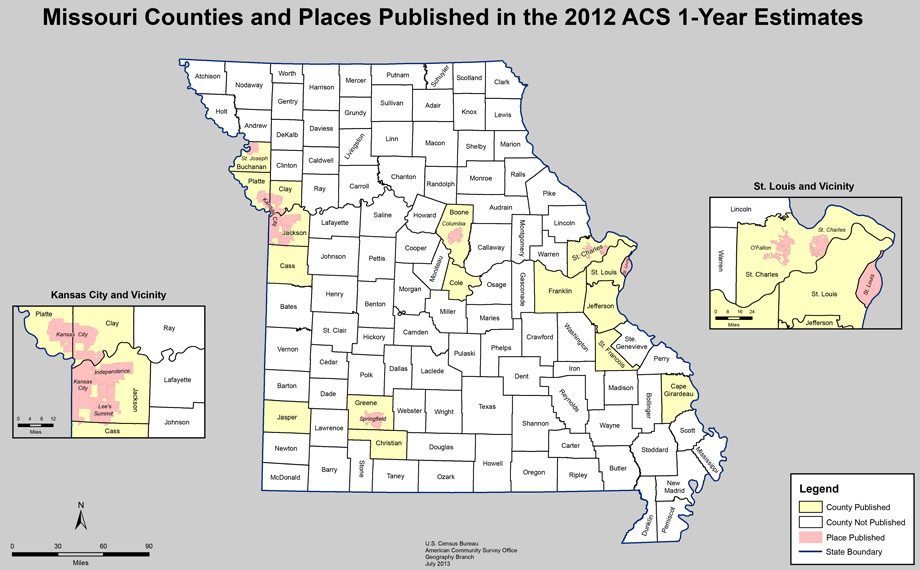 This is the first in a series of three major substate estimate products to be released in the first half of 2014. Key items in this set include the 2013 estimated total population for each state, county, and metropolitan and micropolitan statistical areas (CBSAs). These products contain annual estimates (July 1, 2010 – July 1, 2013) and report components of change (births, deaths, migration) for each year since 2010 plus April–June, 2010. The five new datasets (mocom13, mocom13t, uscom13, uscomcbsas13, and mocomregns13) are available in the MCDC data warehouse. Follow the metadata links in the dataset summary file for details. These datasets are all the same as last year but now include data through 2013 rather than 2012.

While a loss of 700 people is no cause for celebration (for most people; there are those who think fewer people is a good thing) it breaks a two-year losing streak that was almost ten times worse. In the previous two years, the state lost an average of about 6,500 persons. In nine of the ten years prior to that, the state had a net in-migration of more than 10,000 (with a 9,305 increase in the worst of those years, 2007–2008).

Other interesting Missouri trends shown in the new estimates

In case anyone is interested, we got all these numbers by accessing the new uscom13 data set in the popests data directory using Uexplore/Dexter, filtering to get just state level summaries (sumlev = 040), keeping the relevant variables, and passing it all to Rankster to do the rankings for us.